Top things to see in the Philadelphia Area before you die. 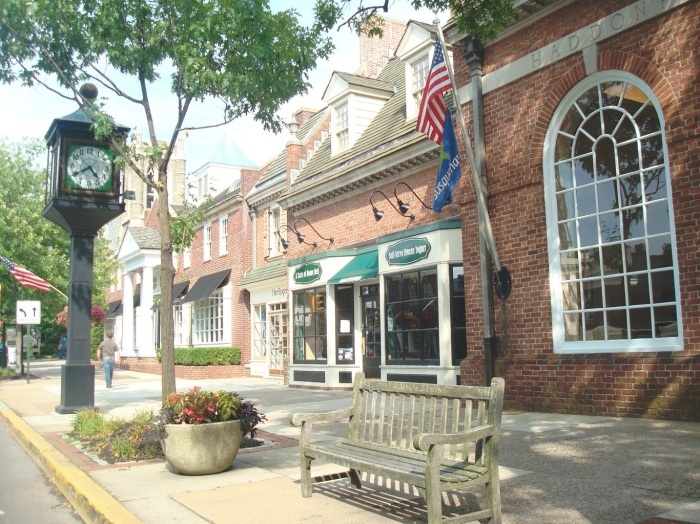 There was a brief discovery in 1838 by a man and farmer named John Hopkins. He was digging with some workers in what they call marl (a clay that is common in the soil here in NJ with abundant nutrients that was popular for farming) and discovered large bones. The location is actually a tributary of The Cooper River. However, nothing really came of it and the bones were thrown away. 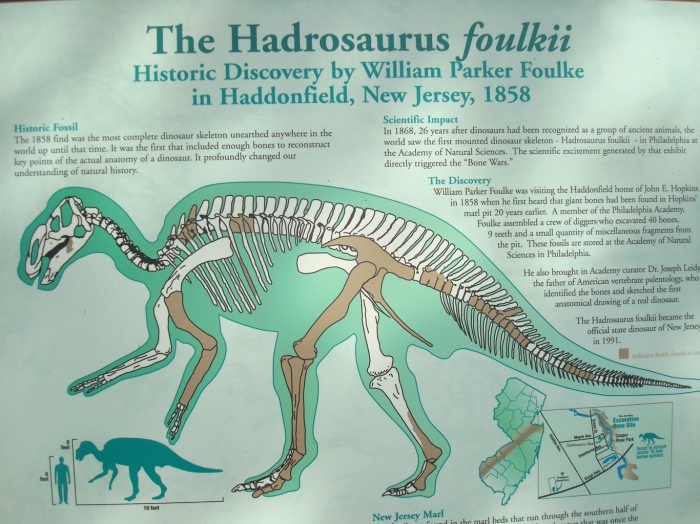 In 1858, a gentleman named William Parker Foulke, age 52 at the time, was vacationing in Haddonfield, NJ. Foulke was a lawyer and avid reformer of the prison system in Philadelphia and had a strong interest in geology. Foulke had learned while vacationing the previous finds in 1838 by the workers and his neighbor,(the farmer) John Hopkins. It intrigued him. He asked Hopkins to assist him and to show him the location of the site. Hopkins had difficulty finding it at first since the area became very overgrown, but they eventually found it. They only had to dig 10 feet to find bones.

The ravine of the discovery now called, Hadrosaurus Run. A stream that runs into the Cooper River

Foulke and Hopkins dug up all they could find with care and ease. Measured everything and wrapped the bones in cloth to transport them carefully. The remains were stored at William Foulke’s summer residence.

Dr. Joseph Leidy, one of the most famous paleontologists of the time and professor at University of Pennsylvania in anatomy was called to the scene. They continued digging throughout that summer until October, but nothing else was found.

Another shot of the location

It was a huge discovery and game changer in the world for Paleontology.

The Hadrosaurus Foulkii was the first dinosaur to be put together and displayed at the Academy of Natural Sciences in Philadelphia and still resides there today.

Through the decades of this discovery, numerous dinosaur bones were unearthed all over the world. The Hadrosaurus discovery became a mere forethought. The excavation site was used as a trash dump for household waste over the years.

In 1984 a local boy scout, Christopher Brees, was looking for an eagle scout community project. He had read about Haddonfield’s history and saw an article in The National Geographic, yet no one knew of its location. He set out to find the site. Found old maps and went to work.

He rediscovered it. Brees then got permission from the Haddonfield council to clean up the area. He received small grants from the Academy of Natural Sciences and other clubs for various projects and he marked it with a 700 pound stone he found at the site. 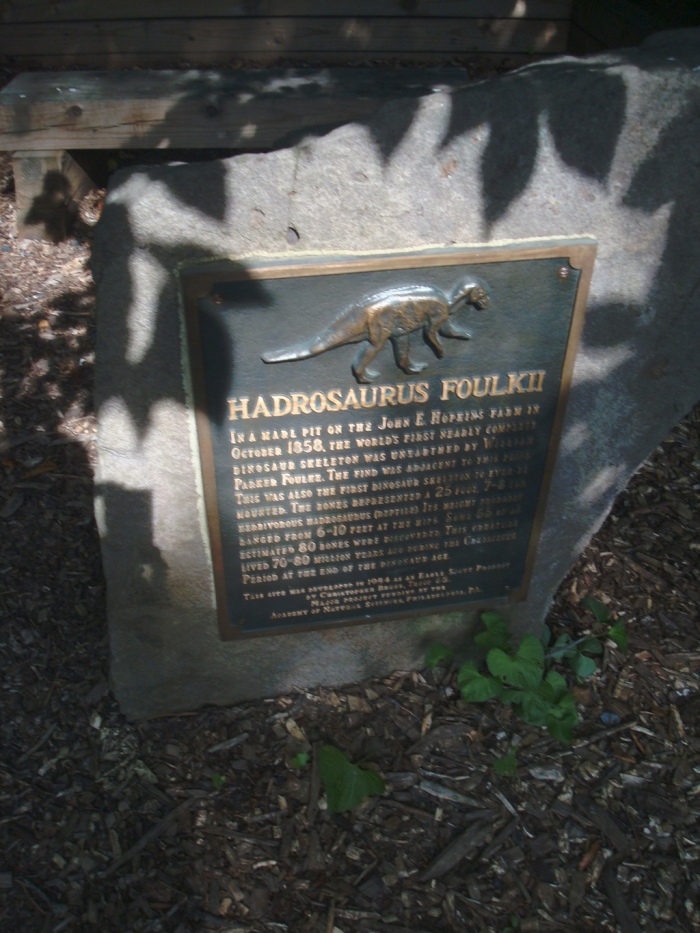 It has become a National Historic Landmark since then. This site is small, but they say you can still find interesting artifacts in the ravine today. Many arrowheads from native americans and shark teeth of thousands of centuries ago have been discovered.

It is now maintained as a volunteer effort by Christopher Brees’ father, Butch Brees. He considers the site, “part of the family.” The site is very natural and beautiful.

There’s a bench for a picnic lunch for the kids. You are welcome to climb down the trail into the ravine to check it out. Possibly finding some artifacts of your own. 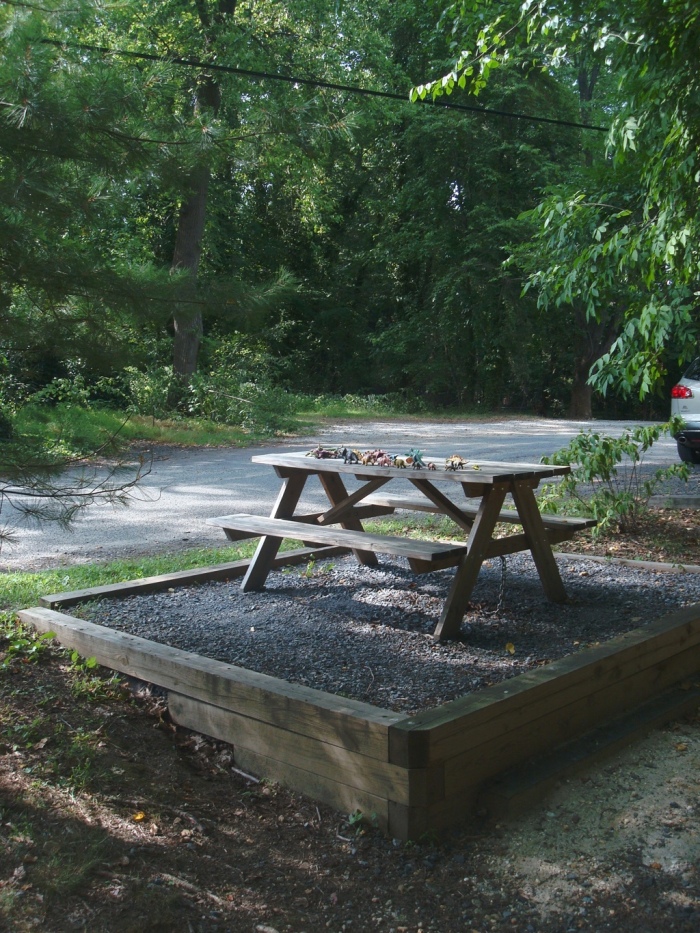 Funny story about these dinosaurs, they are preserved by the “Love Craft Society” some go missing and then replaced by other dinosaurs and no one knows who does it. It remains a mystery, but has cracked up Butch Brees over the years and other folks that have paid a visit. Just another quirky thing us Jersey folks do.

There is also a bronze statue in downtown Haddonfield which is quite interesting and the kids would enjoy seeing. After your adventure at the discovery location, you could just head down the road and enjoy the shops and restaurants of Haddonfield. 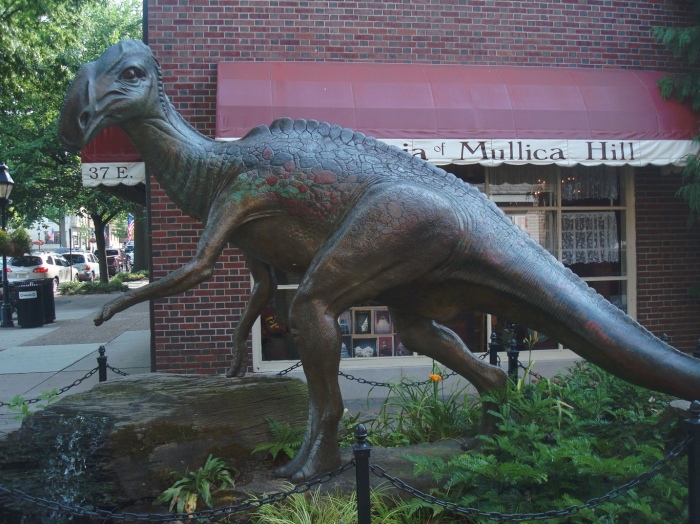 Definitely a great spot to check out here in our area and the kids would enjoy.