The Riverwinds Park in West Deptford is fairly new. At just a decade old, it is a beauty. The land use to be a dumping ground for the Army Corps of Engineers. The Corps dumped dredge residue from scouring the Delaware River. In fact, is it safe? I’m not sure. I’ve tried to find environmental testing of the site. The EPA says it is safe. However, the Deptford Township area contains three filled-in and closed dump sites.

View of the Philadelphia Skyline

I’m just saying this is the typical stigma of New Jersey. I don’t believe dredge dirt will hurt you. I have read reports that dredge dirt can be highly contaminated. I’m not saying Riverwinds is. I am just hoping public officials did their due diligence in testing the site prior to construction. (I haven’t been able to find anything in regards to it.)

I was planning to write a nice story about the park area. I didn’t mean for it to be an attack on anyone.

I came to Riverwinds and parked near the kayak launch site. You will see the Riverwinds restaurant sitting high on a nice grassy hill. The park overlooks a beautiful golf course and the Delaware River. I was quite surprised at the boats in the water. They were docked near a small island and folks were swimming. Approximately 8-10 boats were situated here. All I have to say is yuck!

I would never swim here. There is an oil refinery upriver known to have “run-off” over the last century as well as all the industrial complexes near Philadelphia with their environmental waste. They say it is “safe.” I use to do cleanups as a kid near the river. Used syringes would wash ashore. I wouldn’t even put my hand in the river, but go ahead. If you want to swim that is on you buddy. I’m not joining you. Have fun.

The Philadelphia skyline is along the distance. You can clearly see the Walt Whitman bridge. The Philadelphia airport is directly to the west. The Riverwinds restaurant offers a great view of the city and of the planes landing and taking off. 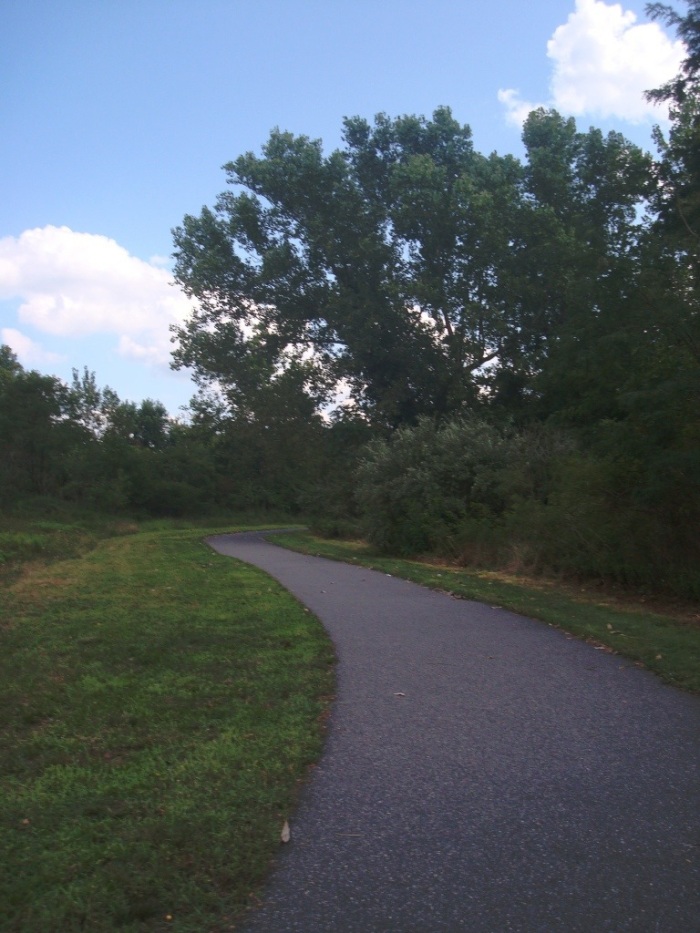 The Riverwinds Park itself is over 1100 acres. It has paved walking trails in a forested section. A community center, ballfields, and an amphitheater for those great summer nights of entertainment.

It is a great area to go fishing (for catch and release) and bird-watching.

There is an awesome rustic scenic trail down the street that is awesome. I will post about it in the future.

My little monkey and I walking the trail together

The view alone is worth seeing. It’s a great place to go and walk around. Watch the planes. See Philly all lit up at night.

They did a great job with the planning. Of course there are bureaucratic issues of missing funds. For example, 4 million dollars just missing, but hey that wouldn’t be “Jersey” though, eh?
Haha, but this is entirely another story.