Yummygal’s Top Things to See In The Philadelphia Area Before You Die.

Have you ever wondered what it is like to feel like a prince or princess? To step back in time to the beginning of our country? See a place so magical that it pulls on your heart-strings? 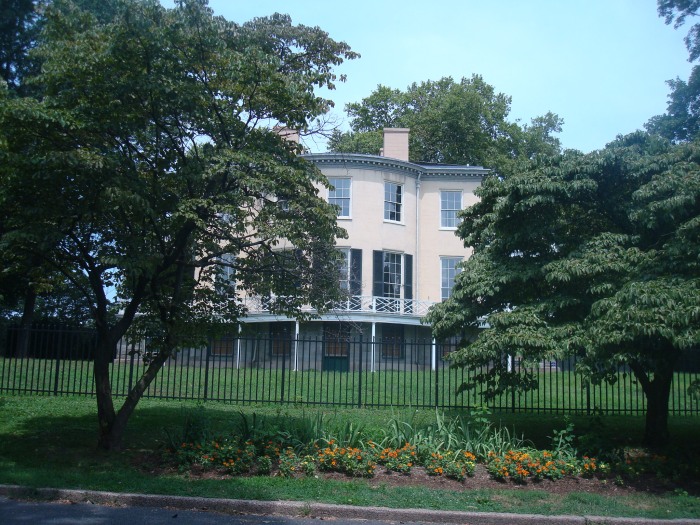 The back of Lemon Hill Mansion. It faces the downtown area of Philadelphia

Lemon Hill Mansion is all of the above. It is the epitome of class of an era very sacred to the city of Philadelphia. The birthplace of our great nation. 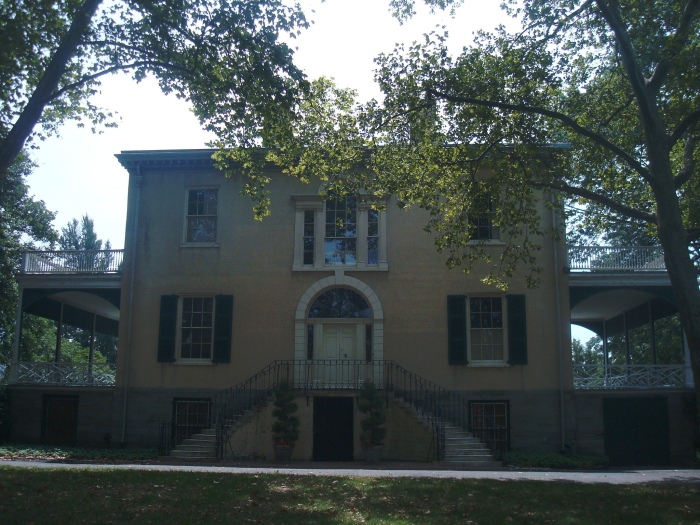 The front of Lemon Hill Mansion

I had the privilege to meet with the director of Lemon Hill mansion. Mrs. Joyce Jones. Quincy (her son), is the wonderful gentleman that saved my family when we were stuck in the pinelands. He told me that I have got to see this place and write about it. I am so grateful to have met Mrs. Jones and Quincy. Also, for having the honor of touring this beloved mansion. 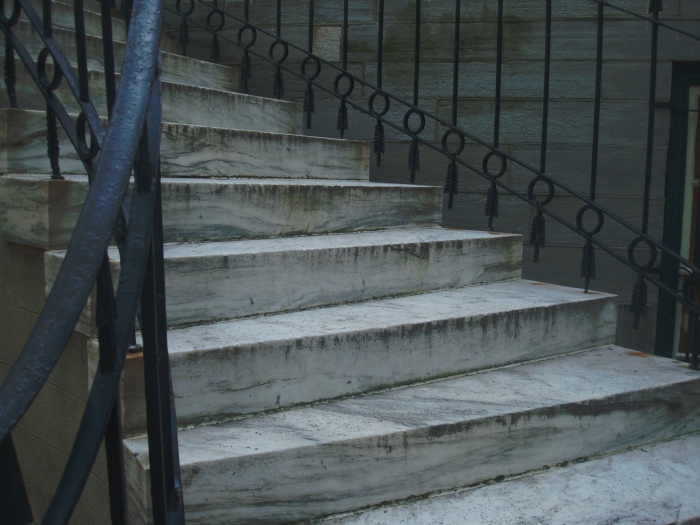 Lemon Hill Mansion received its name from a median lemon that was grown in the greenhouse on the property. The median lemon is in the citron family. It is very fragrant and sweet. It is not as sour as a lemon. It was considered a delicacy at the time because it came from the middle east region and was transported back to the states. Citrus was a status symbol of the very rich. Most folks at that time never had the pleasure of enjoying this particular fruit. 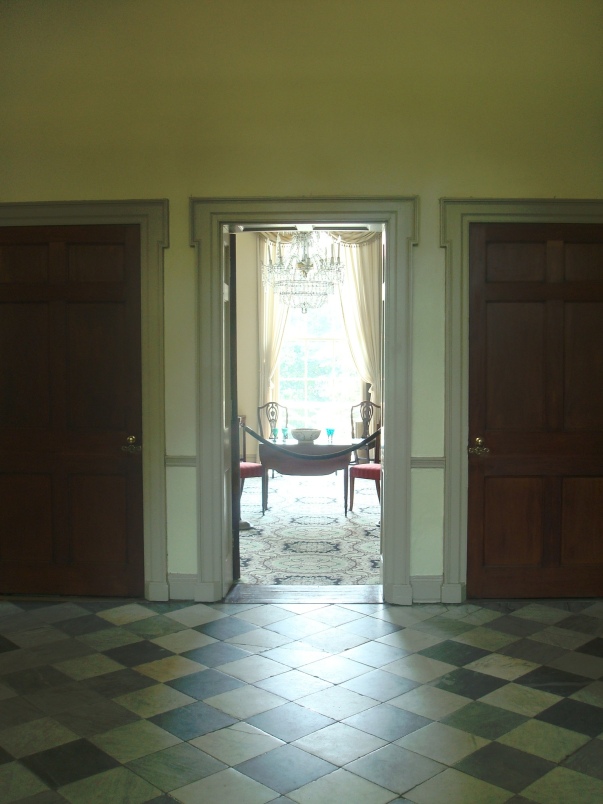 The entryway looking onto the oval room

The land of Lemon Hill was originally owned by William Penn. It was then passed onto his descendants. In 1770, a man named Robert Morris purchased Lemon Hill. The area was then called, “The Hills.” Morris built a greenhouse, hot houses, gardener’s quarters, vaults, and root cellars on the property. 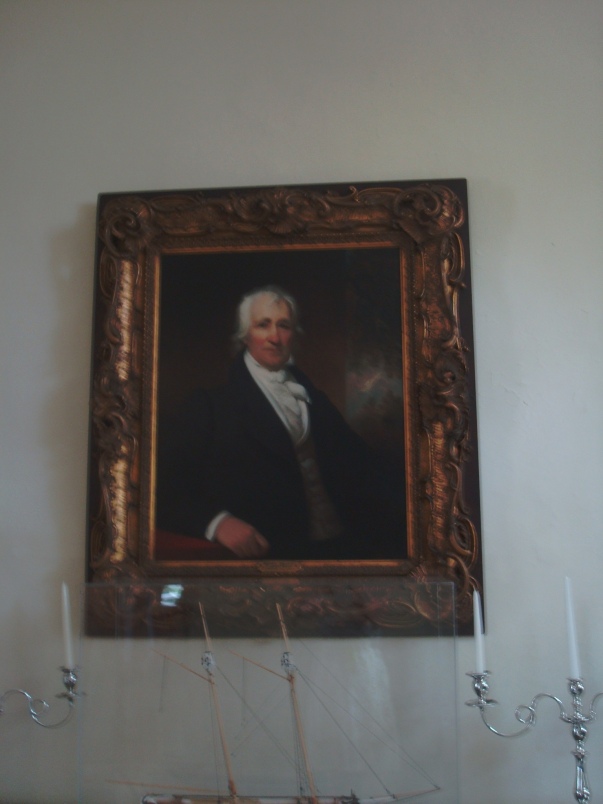 If anyone is familiar with Philadelphia history, Robert Morris was a signer of the Declaration of Independence. He served as senator of Pennsylvania from 1789-1795. Morris was a financier by trade and also the largest land owner in America, accumulating over 6,000,000 acres. This may sound impressive, however he was “rich in land, but poor in cash.” His bad financial investments led him to a debtors prison. Morris was hoping after the war that immigrants would purchase his land and make himself more rich. However, this did not occur.

It is when Henry Pratt stepped in and purchased this land at a sheriff sale in 1799. It cost around $14,000. In today’s dollars, roughly the equivalent of $200,000. Pratt was a very wealthy merchant. This land located in the Fairmount park area, was considered ” the country” at that time. Development only went up to around today’s Arch Street. Westward of Arch Street was predominately forest and undeveloped land.

After purchasing 43 acres of this real estate, Pratt quickly went to work with the construction of Lemon Hill mansion. It took only 1 year to complete this summer retreat masterpiece. It was a marvel at the time. It is a federal style construction. It contains three oval rooms. Each stacked on top of one another from the first to third floors. 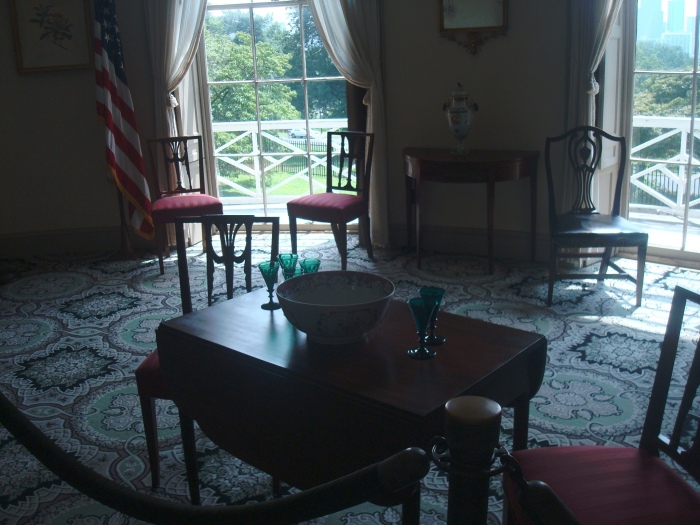 The infamous Oval room on the main floor

The oval rooms are truly unique. The White House cannot come close in comparison to this structure. The windows, walls, doors and fireplaces all curve in an “oval pattern.” It is an architectural wonder and true masterpiece. The White House wishes they could have curved doors like these (they have straight doors.) It is the best example of federal style architecture in the United States.

The gardens and greenhouse were absolutely phenomenal and were considered the world’s most beautiful playground in its day. Pratt opened his land up for an admission price so that folks could enjoy the true splendor of the grounds. They were referred to as the “pleasure gardens” at the time.

Notable artwork by Thomas Sully. Also, notice the curvature of the fireplace

The house was designed in a clever and unique way. The house was purposely situated to face the Schuykill River to allow the cool summer air to circulate throughout the home. This ingenious design made Lemon Hill an ideal summer retreat.

Not one detail was left unturned. Closets were installed in nearly every room (which was unheard of at this period.) The floors were painted almost a black color (the darker the paint, the more expensive). The windows from floor to ceiling were massive (another great expense.) 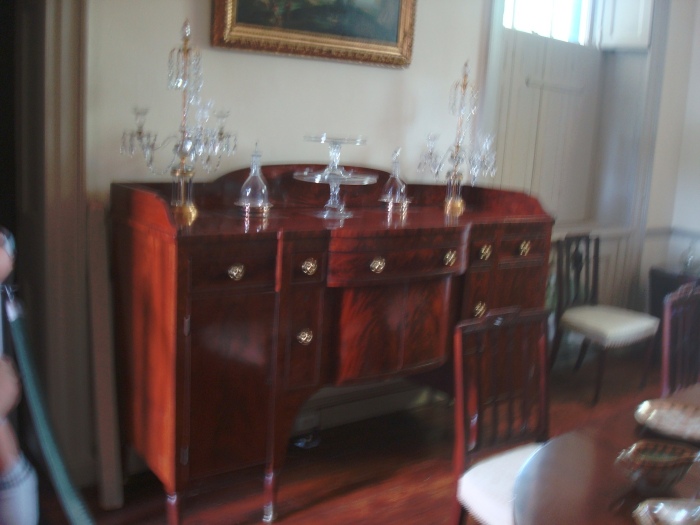 Money was no object in the making of this estate and it clearly shows.

Shortly after Henry Pratt’s death, the estate was sold to the city of Philadelphia. The land resides in the infamous Fairmount Park. Pratt’s estate was one of the first properties purchased by the city. Fairmount Park was created around Lemon Hill. It was the flagship for the engineering of the largest city park in the United States. Philadelphia wanted to preserve their water supply and keep the Schuykill River from getting polluted.

The large windows of the beautiful architecture

Over the years, Lemon Hill has served as a German beer garden, a restaurant, and home to the curator of the Art Museum of Philadelphia.

The director of Lemon Hill, Mrs. Joyce Jones, has been with the mansion for many years. She has had the pleasure in living in this beautiful mansion. Her husband was a police officer and the city needed security for the home. She was able to raise a beautiful family on the premises. Since she already lived on the property, Jones began volunteering for the tours of the mansion. The rest is history. She is now Lemon Hill’s director. No one could be a better candidate to run this place as well as Mrs. Jones. Ever. She knows every nook and cranny. If you are fortunate to tour with this graceful lady, you are in for a real treat.

Staffordshire china. Notice Lemon Hill’s greenhouse to the top left and the ship in the Schuykill river

Another shot at of precious china. A bit of a glare. However, Lemon Hill is depicted in this scene as well as the infamous greenhouse

Her favorite areas of the home are the oval rooms and the expansive porches. The porches have an amazing view of city hall, the art museum, and skyline of Philly. Lemon Hill is honestly the best seat in all of Philadelphia. Katherine Hepburn has even had the opportunity to tour Lemon Hill and is Jones’ most memorable guest. 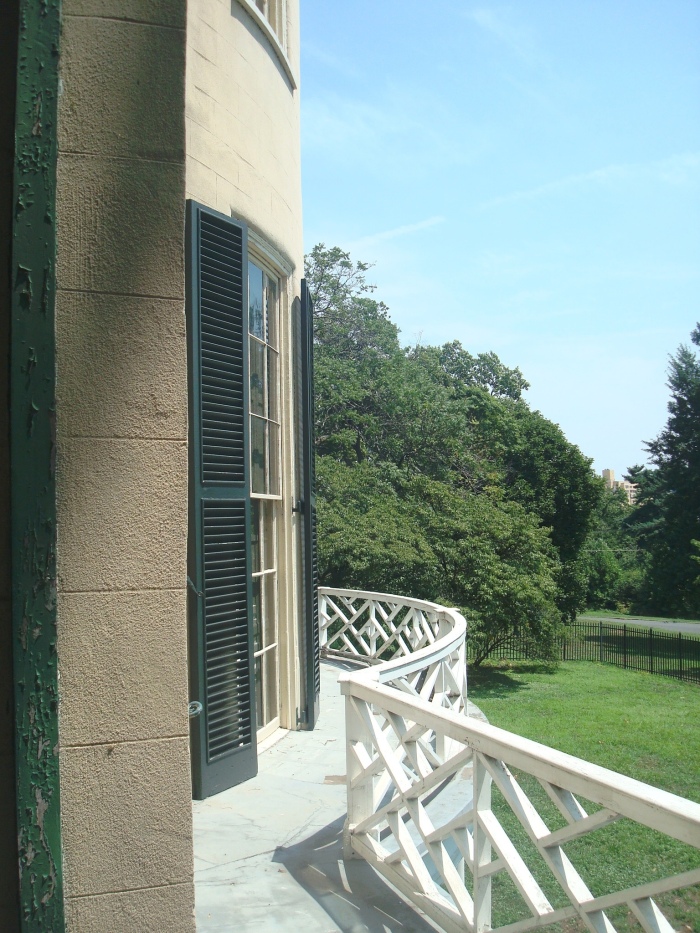 Small portion of the many verandas on the property

Currently, the mansion gives private and group tours Wednesday through Sunday from 10am-4pm.

Lemon Hill also offers tours to school children. Lemon Hill will even pay for a school bus to take the children to the property for the day (up to $200 for a bus) and for only those residing in the state of Pennsylvania. New Jersey schools are permitted as well (they just can’t pay for the bus).

The view from one of the many verandas

Children will get to tour the entire property. They will set up tables on one of the expansive verandas for lunch. The kids also get to play on the mansion grounds. 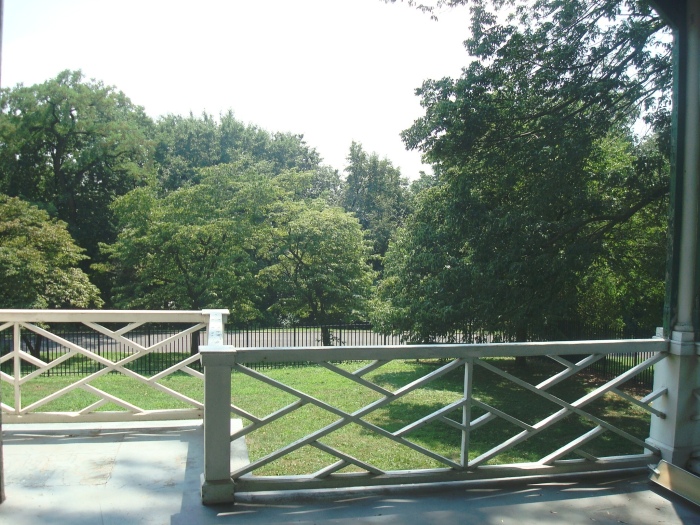 Lemon Hill is also an extremely well-sought after wedding venue. Usually, vows are taken in the front of the mansion on the gorgeous Valley Forge marble stairway. Tents are usually put up on the immaculate grounds. Jones’ says that every bride that has been married here has felt like a genuine princess. Guests can’t get over the location. If your wedding is held here, it is usually the talk of the town.

Robert Morris’ desk, signer of the Constitution and The Declaration of Independence. Pratt’s actual office chair made out of a horse’s tail and made into cloth

Volunteers are always needed. Since it is a home that is over 200 years old, they are always looking for people to help out and to support the upkeep and preservation of the estate. Please contact the Lemon Hill office if interested in giving some of your time. It would be greatly appreciated.

One of only a handful of Apollo statues ever made. The same statute is even located at the Vatican

I want to thank Mrs. Jones for allowing me to feel like a princess for the day. She is a woman of class and distinction. You will truly walk away with a genuine learning experience. It will be a part of your soul for the rest of your life, as it has for Mrs. Jones and her wonderful family. After all, she raised a family here. Quincy, her son, even assisted in tours at the age of 7 and her daughter was married here. It’s now part of their family history. 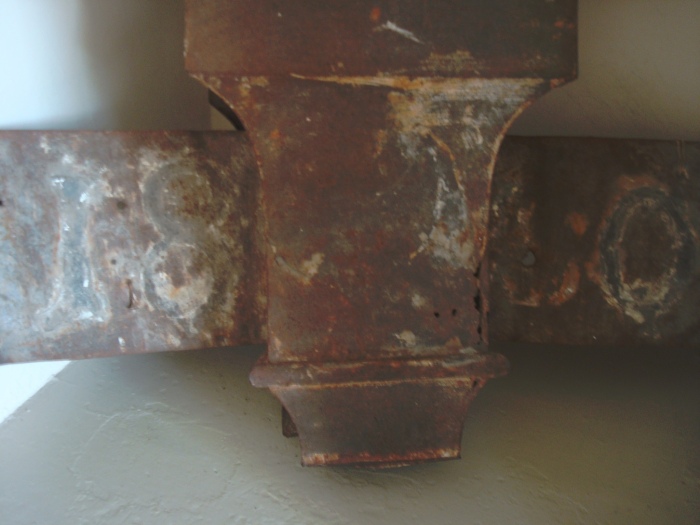 Original spout. Notice the year 1800 marked on here. The year of its completion

There are many other treasures located on the estate around every corner. I didn’t even scratch the surface as i do not want to give it all away.

It is a gem located in the city of Philadelphia.

It’s a must to see in your lifetime.